As part of a major expansion plan of the Public Broadcasting Service using the BIND Scheme, Prasar Bharati plans to increase the capacity of its Doordarshan Free Dish from the existing 166 TV channels to around 250 TV channels. More recently, the government promised to run 50+ educational TV channels in a few years. Which has also been completed, and with the help of those channels today the children of the country are getting educated at home even during the Corona period.

For this, the government has approved the 'Broadcast Infrastructure Network Development (BIND) scheme with an outlay of Rs 2,539.61 crore for the modernization and development of Air India Radio (AIR) and Doordarshan.

Prasar Bharati CEO Gaurav Dwivedi said that the Broadcasting Infrastructure and Network Development (BIND) scheme recently approved by the Union Cabinet will improve the broadcasting infrastructure in the country and help expand the All India Radio and Doordarshan networks.

He said that through this scheme (BIND) - 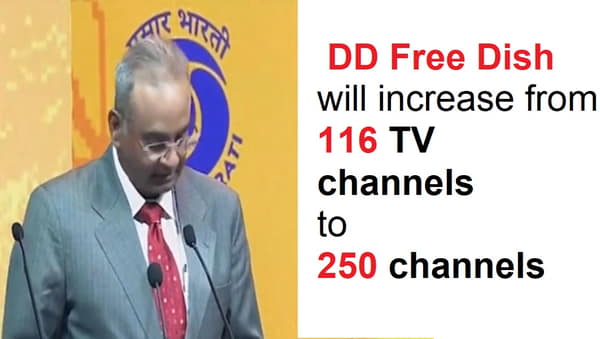 Also, Know the technology that can increase TV channels in DD Free Dish

If you want to get such amazing information about the country's free TV service by email, then subscribe now.